Reschedule Parliament Or Cut Our Pay For Each Cancelled Sitting Day

South Australian Senator Rex Patrick has called for the pay of Federal MPs and Senators to be docked by $1,000 for every scheduled sitting day which gets cancelled, rather than rescheduled.

"Millions of Australians are facing huge financial difficulties as a consequence of COVID-19 lockdowns and restrictions," Senator Patrick sad. "All too many Australians have lost their jobs and many others are working reduced hours with significantly reduced pay. Federal politicians should not be insulated from the impacts, especially when many MPs are not doing fundamental work they are rightfully expected to do; oversight of Government and reviewing and voting on legislation."

"While the immediate advice of the Acting Chief Medical Officer needs to be followed, Prime Minister Scott Morrison’s decision to cancel rather than reschedule two scheduled sitting weeks at the beginning of August is highly disappointing and sends precisely the wrong signal to Australians."

"There were only 30 Senate sitting days left for 2020. The Prime Minister’s decision reduced those planned sittings by more than 20 per cent. Those August sitting days should not have been cancelled, but rather rescheduled to September, which has only three sitting days planned. There is a lot of work to be done."

The House of Representatives and the Senate have met this year for only 27 and 23 days respectively. Even if there were no further cancellations, the Parliament will meet for significantly fewer days this year than in other years in which a federal election was not held.

"The Government’s failure is clear. Preparations should have been in hand for the Parliament to meet safely, with more rigorous social distancing and other measures to minimise risk," Senator Patrick said. "The necessary legislative, procedural and technical measures should have also been implemented so that, if no other alternative was practical, the Parliament could convene virtually to conduct essential legislative business."

"Instead many Federal MPs will remain unable to perform the core oversight and legislative work they are paid to do. While some MPs and Senators are heavily engaged in Committee hearings and work, many are not."

"When Parliament does reconvene, the Government will no doubt seek to ram through its legislative agenda in the shortest possible time and with the least possible debate and scrutiny. On the last sitting day in June, the Government proposed a time management motion to limit debate on as many as 13 bills. That wasn’t democracy and that shouldn’t be what happens in whatever sittings take place in coming months."

"The work of many Parliamentary Committee’s has also been scaled back – the Senate Select Committee on COVID-19 being one exception. The Parliament’s role in scrutinising public administration, examining government legislation and developing public policy has not been occurring."

"The Government shouldn’t be cancelling sitting days," Senator Patrick said. "The August sitting should be rescheduled, and if not, then MPs shouldn’t keep getting paid their full salary."

"A $1,000 pay cut for each sitting day cancelled and not rescheduled is a very reasonable adjustment consistent with the circumstances of the COVID-19 crisis. The Government should make an appropriate recommendation to the Federal Remuneration Tribunal, and failing that, introduce legislation to implement the reduction as soon as the Parliament reconvenes, with the change effective from the beginning of August." 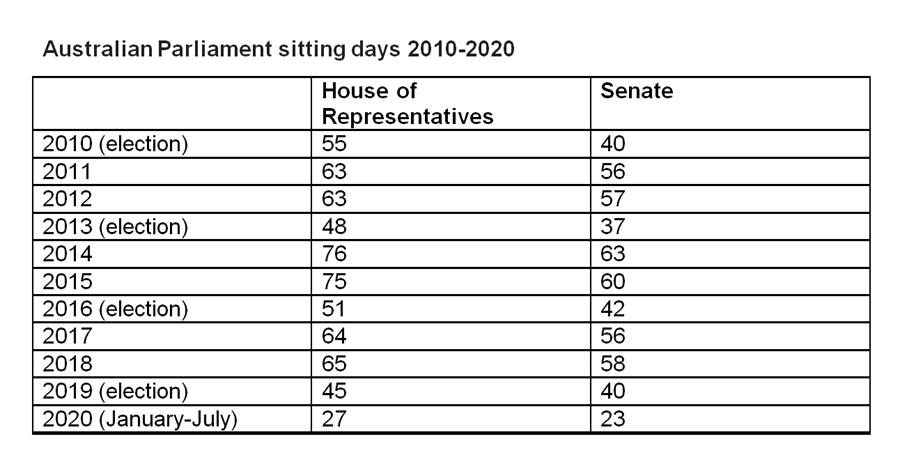